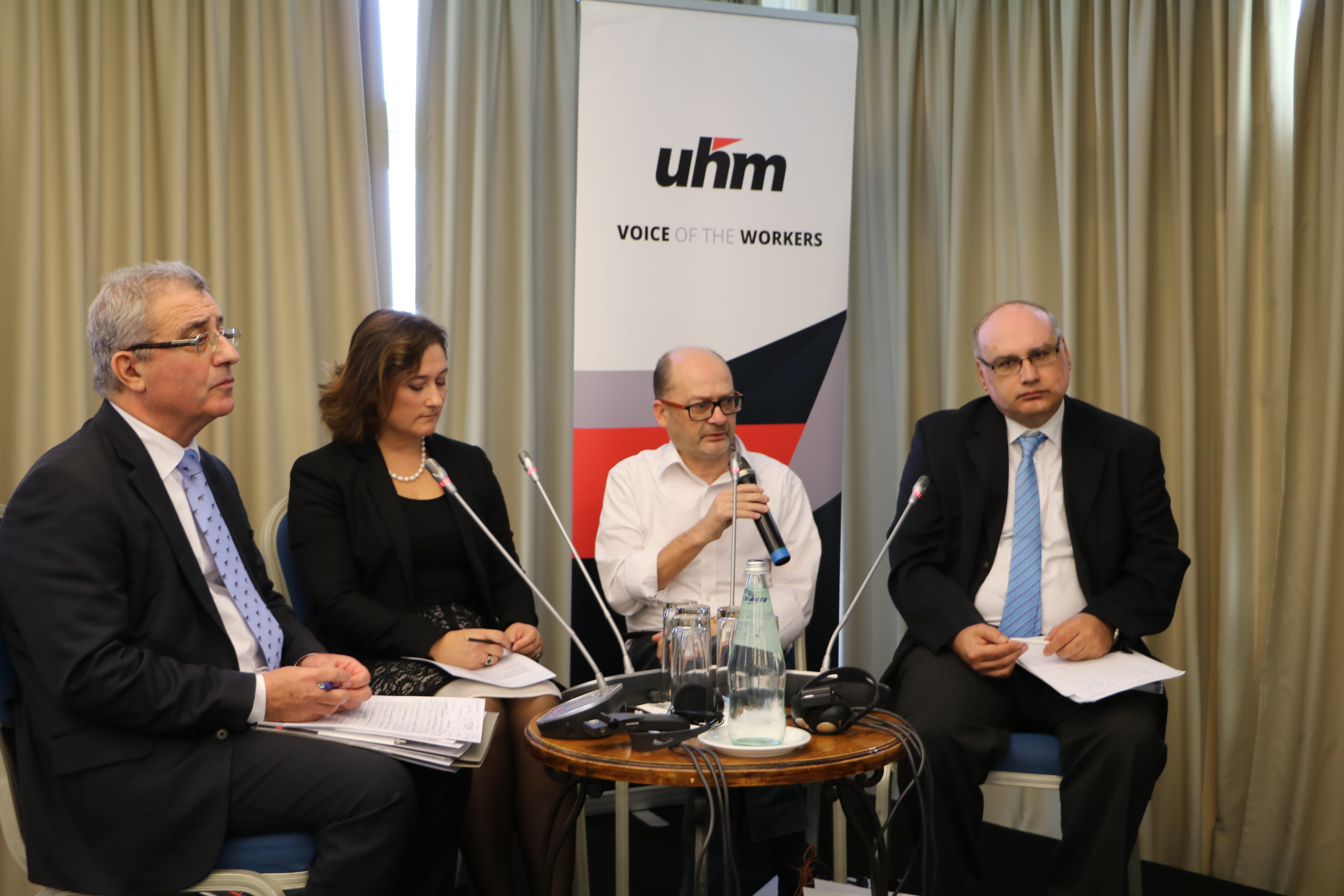 The sustainability of pensions and adequate solutions to the pensions issue, such as the introduction of government bonds that mature once one retires, were among the ideas raised during the seminar on the European Pillar of Social Rights organised by the UĦM  Voice of the Workers in collaboration with The European Centre for Workers’ Questions (EZA). The event was held at the Cavalieri Hotel in St Julians over two days, Thursday 23rd and Friday 24th November 2017.

At the start of the first session, led by Gabriel Schembri, a journalist with The Malta Independent, Rev. Prof. Emmanuel Agius, Dean of the Faculty of Theology at the University of Malta, said that the Church welcomes the European Union initiative as a sign of a renewed commitment to promote the social order which ensures an economy that benefits the people and reduces poverty. The Commission of the Bishops’ Conference of the EU stated that, if this initiative is implemented as it should be, it would enhance people’s lives and reinforce citizens’ social rights, thereby strengthening the dignity of each citizen.

Rev. Agius, who is also a member of the European Commission’s Advisory Group named European Group of Ethics in Science and New Technologies, said that,  at the time of recovery from an economic and financial crisis and changes that left a negative impact on the job market, the European Pillar of Social Rights, as an agreement among the EU, the member states and the social partners, can contribute to restoring the citizen’s faith in an inclusive and just Europe.

He stated that the motor which drives social convergence is education. Education should promote the integral development of people, skills, lifelong learning and access to social benefits and integrated services. The digital revolution has made training and lifelong learning essential.

Oliver Rӧpke, a member of the Workers Group within the European Economic and Social Committee  (EESC) explained the story behind the Social Pillar and stated that the EESC was adamant from the start that this Pillar is vital to ensure the implementation of the necessary social reforms. Oliver Rӧpke underlined the importance of the 20 principles encompassed by the Pillar, emphasising that the Pillar should be used as a guide for social convergence.

He said that employers are opposed to the social pillar and called for better implementation of existing regulation.

Oliver Rӧpke said that the Pillar for Social Rights is the first step for a social Europe and this is the right time to emphasise the principle of “equal pay for equal work.”

In brief, Oliver Rӧpke said that the proclamation of the Social Pillar should go even further and the EESC is expecting it to lead the way to a better plan of action. The European Union should not be based solely on the Four Freedoms but also on the social rights which should be strengthened. “The Fundamental Social Rights should be a priority.”

MEP David Casa said that the Social Pillar is a strong political commitment. It will act as a social guide for the member states and European institutions. It is a guide and a compass for future legislation that permits Europe and the member states to harmonise their social policies.

David Casa said that the Social Pillar puts social Europe back where it once was: at the top of the European agenda. He claimed that the most effective weapon against Euro-scepticism is showing European citizens that Europe is indeed a force of protection – social protection.

He continued to say that social dialogue plays a central part in the strengthening of social rights as well as sustainable and inclusive growth. There are various social dialogue practices, agreement on collective negotiations and salary calculation systems across the many member states. David Casa added that the social partners have a principal role to play in the economics of the social market that aims for economic performance and social justice.

During his intervention, Prof. Andrew Azzopardi, the Dean of the Faculty for Social Wellbeing at the University of Malta, said that the success of the education system is measured through the number of youths on the job market. Education, training and employment should be included in employment policies. He said that while training and education are the motors behind the rates of employment, a sustainable employment strategy needs to encompass strategic actions.

Prof. Azzopardi said that to address the discrepancies in the education system one needs to take into account the needs of the job market and focus on essential skills. Society has a crucial role in encouraging individuals to infiltrate particular industries. Prof. Azzopardi stated that educational services should be designed to include all.

Dr. Anna Borg, the Director of the Centre for Labour Studies at the University of Malta, said that this is the right time for the unions to create a more social, more human and more just Europe.

She spoke about the discrepancy between the salaries of male and female employees as the difference in pay between women and men who have the same education, training, experience and profession. In many cases, women turn out to be paid less than men when these factors are compared. Dr. Borg believes that the unions are crucial to control these discrepancies in pay.

According to Dr. Borg, the European Pillar of Social Rights should not be allowed to function on its own but needs to be driven by the EU institutions and the unions.

The session of Thursday, 23rd November ended with a presentation by Ambra Cristaldi from ICON who, together with her colleagues, is assisting UĦM Voice of the Workers in an ambitious project to put all employment contracts online – an initiative to address precarious work.

The second day of the seminar started with a discussion on how the European Pillar of Social Rights can contribute to better rights and protection. Particular emphasis was made on the issue of the pensions.

Dr. Philip  von Brockdorff, a UĦM Voice of the Workers consultant and representative of the union on the EESC, said that more effort should be made to introduce the second pillar pensions. He said that Government is giving out mixed messages as, while on the one hand support for work pensions was evident in the Budget, there were moments where the Government was stating that they should be mandatory. “We would like to introduce the second pillar pensions in a voluntary way through collective negotiations to start to convince workers and employers of the benefits of such schemes,” said Dr. von Brockdorff.

David Spiteri Gingell, a pensions consultant, said that the pensions strategy group of 2015, of which he formed part, had recommended that discussions be held on “automatic pensions”. He explained that the system is based on the concept that individuals who enter the job market be automatically included in a work private pension with an opt-out option.

Therese Comodini Cachia, Education and Employment Shadow Minister, said that the sustainability of the pensions should not be addressed as a sole issue but within a wider context. She said that there should be long-term policies, not initiatives tied to the period of the general election.  She added that the second pillar pensions are on the agenda, particularly given Government’s position that their introduction at this time may impact the country’s competitiveness.

Evarist Bartolo, Minister of Education and Employment, said that the issue of the pensions should be addressed with an open mind and flexibility. He said that we need to look beyond issues to do with social security contributions to policies that take into consideration issues of demography and immigration. Minister Bartolo suggested that the unions and employers in the private and public sector start to consider the issue of government bonds that mature at a pensionable age.

During the first part of the second session that was led by Keith Micallef, journalist of the Times of Malta, the Labour MEP and ex-Prime Minister of Malta Alfred Sant gave a speech about the development of the European Social Policy. He said, among other things, that the strategies that were followed in the 90s are limiting, in an extreme way, the potential for development of the social front and this, in the light of the significant retractions made since 2008.

He said that in the current circumstances, there needs to be consolidation. The discrepancies between a country in the north and a country in the south, between east and west and in the centre of Europe, need to be addressed through a political programme that does not depend solely on the mechanisms of the free workings of the employment market.

The same applies to the social divergence within the member states, between individuals who enjoy the benefits of a stable, well-paid job and those who work with less pay and/or have to accept precarious working conditions. He added that there is a genuine recognition that the European project should take better account of the social model. This can only happen once the discrepancies and contradictions which have resulted from the growth and broadening of the European Union in the last 20 years have been addressed.

Prof. Josef Pacolet, from the Research Group on Social Policy, the Economy and Social Inclusion, spoke about the importance of the Pillar of Social Rights today and in the future. He looked at the history of social policy that dates back to the setting up of the European Community.

The seminar ended with a team-building exercise that was led by Michael Fenech and Ann Fenech from Ideas Alive.

Need to give more importance to Vocational Training and Education