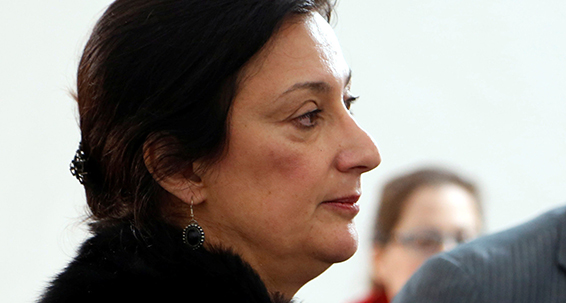 Maltese journalism has lost a pillar of freedom, a safeguard of democracy. The country is in mourning after the vile murder of journalist and blogger Daphne Caruana Galizia.

Monday, 16 th October will be remembered as another black day for our country. Malta and its citizens were under deep shock. Everyone was stunned by what happened. She was loved by some who admired her courage and she was hated by others. However, when you hear about the murder and the way it was carried out, how could you not be shocked? This was a precisely planned assassination to once and for all eliminate a person who did not shy away from telling the truth.

The macabre murder of Daphne Caruana Galizia was a blatant action against the freedom of expression. It was a base and vile murder perpetrated by someone who was not able to match the journalist word for word and instead resorted to the hidden arm of violence and evil.

Her blog shot up in popularity after she revealed the biggest corruption scandal in the country – the Panama scandal as well as other scandals that occured in the last few years. She became even more popular when she alleged that she knew who owned Egrant.

I remember Daphne Caruana Galizia way back in 1994 when we both attended anthropology lectures at the University of Malta. She never shied away from arguing with the lecturers and used to go beyond the books and notes we were given. She questioned everything and, I dare say, she was at times a step or two ahead of the rest in her thinking and the discussions we used to have with the academics.

Voice of the Workers expresses its condolences to the family of Daphne Caruana Galizia and hopes that justice is served quickly and that no time is wasted in finding out who perpetrated this act and ensuring that they are punished for it. This portal welcomes the news that there will be an independent investigation and welcomes the arrival of foreign investigators so that this crime is solved in the shortest time possible.

This abhorrent incident in our country’s history will not stop us from expressing ourselves freely. It is true that we are all angry and saddened about what happened. It is also true that we are not living in a normal country because in a normal country those who reveal wrongdoings are not killed off. We cannot revealing the truth. We have to go on fighting the evil and corruption that are smothering our country.