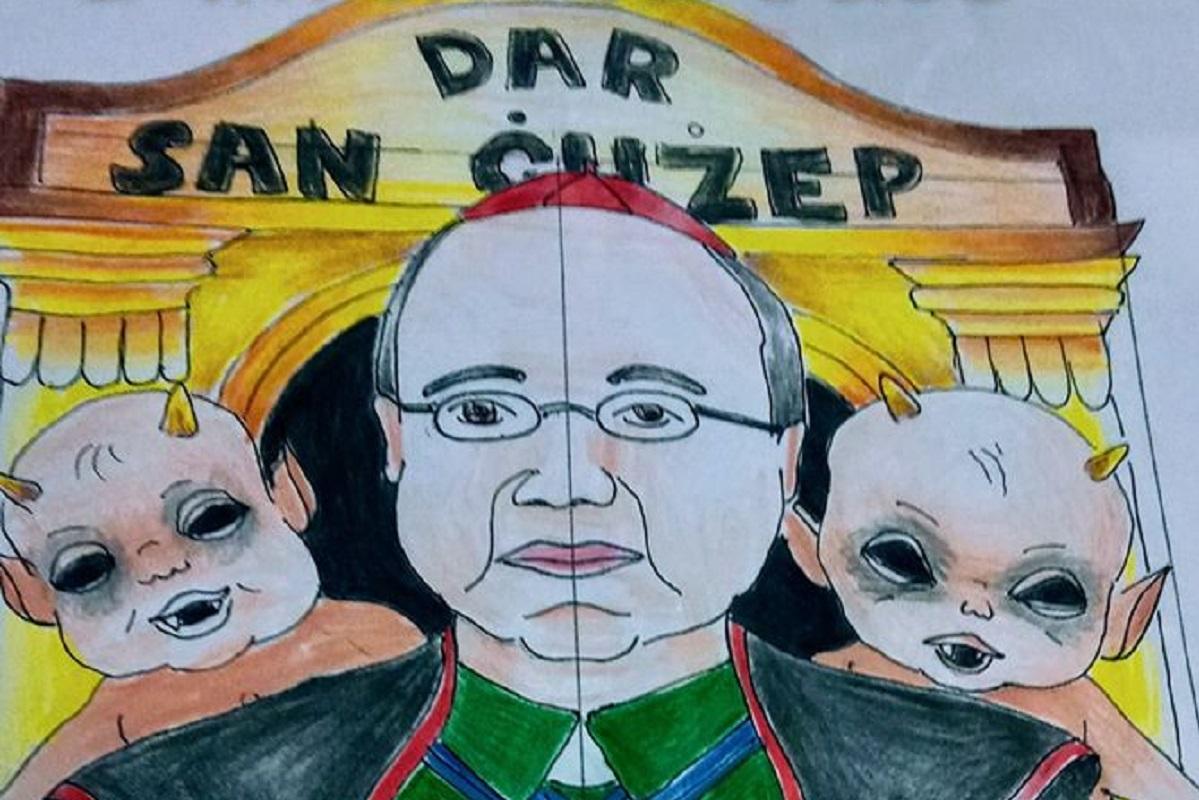 The creation of a Carnival float showing Archbishop Charles J. Scicluna and Dar San Ġużepp has given rise to controversy because it implies the abuse that occurred at this home some years ago.

It appears that this float offended the directors of Dar San Ġużepp in Santa Venera, so much so that the St Paul Missionary Society is ready to take legal action of this float is part of the Carnival. Archbishop Charles Scicluna said that, while he is not offended by satire, this float is inappropriate for Carnival.

A spokesperson for the Police Corps told Voice of the Workers that owners of floats can create satirical figures of persons in authority, such as the faces of the Police Commissioner, the Commander of the Armed Forces or the Archbishop, as long as they are not ridiculed or do not imply that they are involved in criminal activity. If they do this they can be detained under Article 82 A of the Criminal Law and taken to court. With regard to the float that created the controversy, the Police cannot take criminal action but the Archbishop can take civil action against the owner of the float.

Professor Vicki Ann Cremona, a Theatre Studies lecturer at the University of Malta and expert on the Nadur Carnival also reacted to this issue and told this portal that if the anti-censorship law were applied it would preclude the owner of the float from being arrested but he would be warned that such a float would not go down well with the public and may offend many people. “Of all the things that are happening in this country that lend themselves to caricature we had to choose the Archbishop?”, asked Vicki Ann Cremona.

Voice of the Workers also spoke to Mark Schembri, artist and caricaturist.  He said that, as happens in each art sector and in anything that is subjective, interpretation is key. Given that in the last few years the Carnival in Malta has been given a satirical twist, something he has been involved in from the beginning to make sure that this is done well, the float creators have taken on new responsibilities.

Theoretically, Mark Schembri opposes the censorship of satire as this kind of interference would nullify the very reason why satire exists. However, it is of vital importance that the creator of the float in this case is very careful about what symbols and metaphors he uses to relay his message. If he does not think through his use of a symbol he will be creating scope for misinterpretation. He may end up being misunderstood and any criticism of a particular position could be misinterpreted.

With respect to the idea that at the carnival everything should be kept light and innocent, Mark Schembri asks what we have come to want from our carnival. He said that one needs to appreciate the fact that once the idea of satire has been introduced to the Maltese carnival a risky element has been added that does not go well with the notion of lighthearted innocence.

Mark Schembri explained that at the carnival of Viareggio in Italy, where there is a tradition of artistic satire, there was a float that featured the ugliness of domestic violence. This float did not spread joy but had a very important message to convey.

He said that he does not condone the fact that the children of Dar San Ġużepp are implicated as they are already victims of their life circumstances and this will be increasing the stigma they suffer.

Voice of the Workers contends that, while it supports satire there should be some control on artistic creations. Let us have fun during this reign of foolishness without making fun of anyone in a malicious way. Although artists today enjoy freedom of expression, legal parameters should always be observed and respected.

We need to rebuild Malta’s reputation

A fair and prosperous European economy