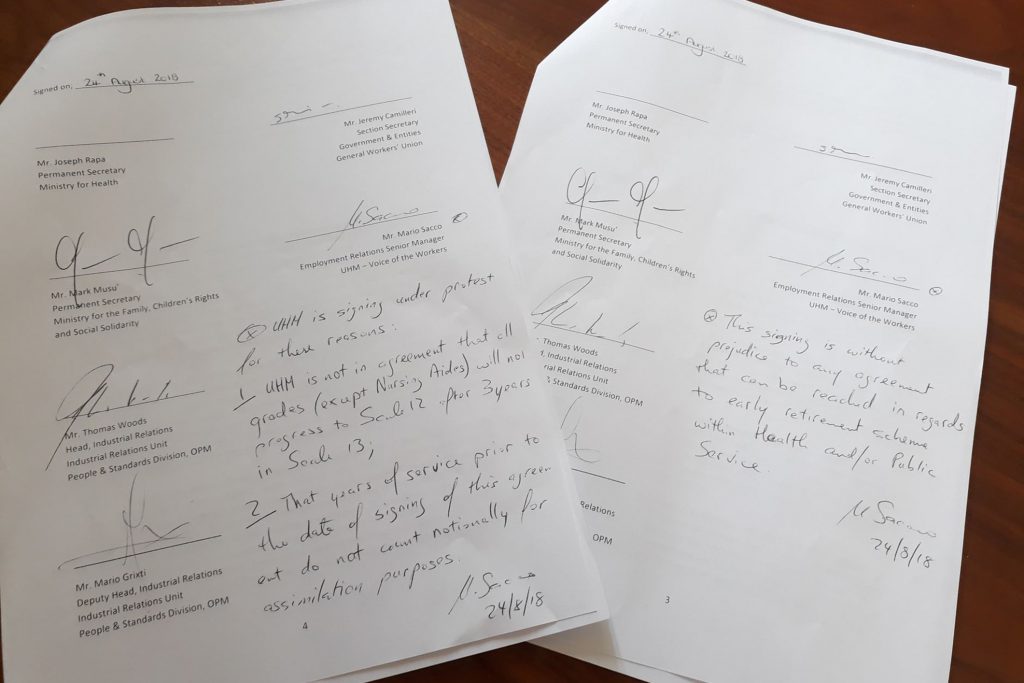 The UĦM Voice of the Workers, under protest and without prejudice, signed a collective agreement for workers in the caring sector who work at hospitals and elderly people’s homes around Malta and Gozo.

This agreement created what is called a career stream. Prior to this agreement there was an overlap of duties between different grades with different pay levels when most of the workers do the same work on a day-to-day basis. Now, through this agreement, the workers in the grades mentioned above will be in one stream and they will be able to progress up the scales according to number of years in service. These progressions start from Scale 17 and continue up to Scale 13 and Scale 12 for Nursing Aides.

Mario Sacco, Employment Relations Senior Manager at the UĦM Voice of the Workers explained the saga behind this agreement. He said that this union has been negotiating on behalf of the workers in the caring sector in the Health Department for months and has met with a number of obstacles along the way. The union was about to come to an agreement but when it received the first draft it had made changes to parts of the document as it felt that some points needed to be addressed further.

The UĦM Voice of the Workers also identified a few unintentional mistakes in the agreement draft that it felt should be corrected.

Mario Sacco said that after it had sent its counter proposals, the union received an email invite to sign the document on the 24 August 2018 (with the same document that had been sent before attached).

The UĦM was now faced with a few choices: either not sign and continue to insist on the points that it felt should be addressed; sign in the knowledge that the pending issues would be put aside and forgotten; or, sign and make its thoughts on the document known with the aim of continuing the process in the future. The UĦM chose the latter option, unlike the General Workers’ Union (GWU) which went ahead and signed. For the UĦM, its actions signal that this chapter has not yet been closed.

Mario Sacco said that the UĦM did not conclude on a number of points. He explained that within the health sector there are other ongoing negotiations with other workers, such as the nursing staff, and the union is considering recommendations from the Government regarding an early retirement scheme. The UĦM Voice of the Workers signed the agreement but did so without prejudice to any agreement that there may on early retirement. Mario Sacco said that if this scheme were to come into effect, the UĦM will be putting pressure on the Government to include these workers in this scheme.

This sectoral agreement will strengthen the career of those who are in the caring stream. However, we all know that the Government subcontracts health services from the private sector to increase the staff numbers.

The UĦM Voice of the Workers asks about the principle of equal pay for equal work. Are those who are employed by contract with the private sector going to be given the same pay and the same conditions as set down in the agreement signed on the 24 August?

« We need to control the noise pollution surrounding us
Brexit: No withdrawal agreement without a “backstop” for the Northern Ireland/Ireland border »

We need to control the noise pollution surrounding us