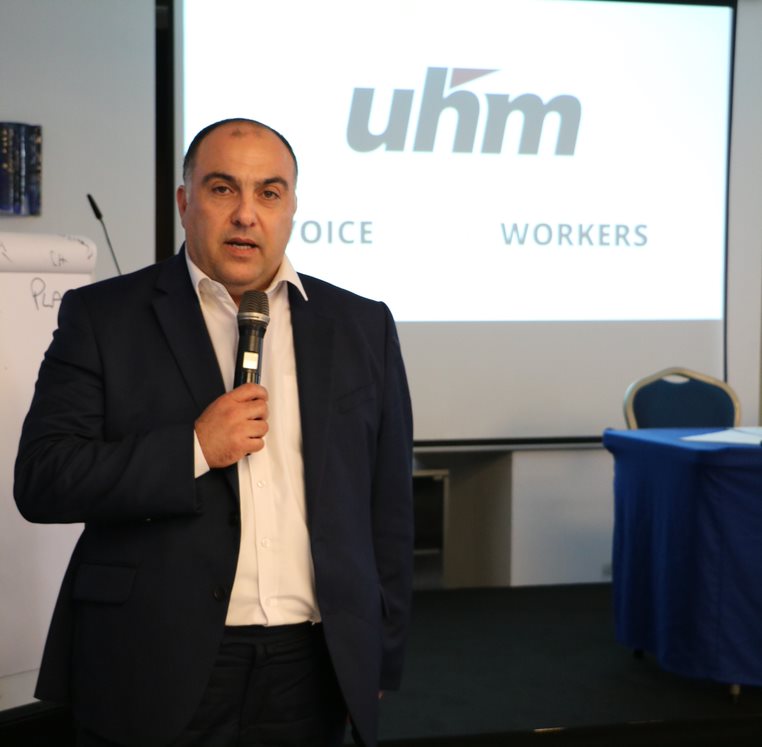 “We need to implement a plan that addresses this national crisis at once to stop this country haemorrhaging to death.” So said Josef Vella, Chief Executive of UĦM Voice of the Workers, in an emotional plea during his address at the end of a two-day workshop on Health and Safety at the Workplace, organised by the UĦM Voice of the Workers and European Centre for Workers’ Questions (EZA) at the Cavalieri Hotel in St Julians on Friday, 6 December 2019.

He said that, as things stand, we are living in a state of constant crisis.  He said that he believes that the health and safety of the country is at risk. It is extremely difficult to explain what is happening. There is a political crisis, a social crisis and an economic crisis.

Josef Vella is concerned about our immediate future. “We have already been hit by this crisis … there are workplaces that cannot make commercial transactions; there are already workplaces that cannot buy or import prime materials from overseas. This is because some foreign countries are not accepting transactions through Maltese banks”, said the Chief Executive of UĦM Voice of the Workers.

This means that the country is grounding to a halt. The country is almost at a standstill. This is the current situation and we need to be honest about where we stand.

The UĦM Voice of the Workers has the honour of saying that it has always been on the right side of this issue. This union had long been warning the Government about the political individuals who were involved in the Panama Papers. The Government chose to do nothing to address the situation. In 2016, Josef Vella was interviewed by Daphne Caruana Galizia, the journalist who was brutally assassinated. During the interview he had told her that this country “is living under a black cloud”. Today he would say that we are in the eye of a vicious storm, a storm that has brought us to a crisis of multiple levels.

Josef Vella hopes that we remain united on a national front and that the situation does not escalate into violence. This appeal is not being made by the UĦM Voice of the Workers alone but was also made by the Malta Council for Science and Development (MCESD) to the President and by the President of Malta in his address to the Maltese people in the last few days.

The Chief Executive of UĦM Voice of the Workers is very disappointed to note that, in this time of crisis, the Government is presenting a conventional change of power plan.  Such a plan would be acceptable in normal circumstances where the Prime Minister is resigning of his own will. Josef Vella stated that it would have been a good plan if the Partit Laburista had taken the necessary measures to ensure that it does not wait until the 20 of January to elect a new leader and a new prime minister. In these circumstances, we cannot address a crisis with a run-of-the mill plan. We need a crisis intervention plan to fit the crisis we are currently living. But we have not arrived there yet.

The longer we extend this crisis, the more damage we are doing to the country’s reputation, to workplaces, to workers and to their families – everyone will be impacted. As soon as a crisis intervention plan is implemented, a long-term strategy needs to kick off. A strategy that addresses the problems that exist today – problems of transparency, institutional independence and good governance. “We need to reform the country”, said Josef Vella.

He appealed to the foreign delegates at the workshop not to badmouth Malta and not to describe it as a corrupt country when they go back home. “There are Maltese people who are corrupt and do not deserve to be called Maltese. Not all Maltese people are corrupt, not all Maltese people have secret accounts in Panama. The majority of Maltese pay their tax bill before the salary is even in. Do not paint Malta as a country of criminals. There is a small number of criminals in Malta but not everyone is involved in crime.  Do not ask the European Union to punish Malta”, said Josef Vella, adding “this is the time for the European Union to help us find our way out of this crisis; the bad apples should be punished and should get what they deserve, not genuine people of good will.”

The UĦM Voice of the Workers has not been passive. It has held discussions with the President of Malta and the Leader of the Opposition; the UĦM has protested, has joined in the protests and has raised its voice throughout. The UĦM is committed to doing its bit; the UĦM is paying the price so that it wins back the full faith of the European Union.

Earlier in his address, Josef Vella said that many Maltese are not conscious of their legal obligations with regard to health and safety. Some employers do not organise health and safety training programmes because they consider them to be an extra expense. Effective programmes on this topic educate workers about the right behaviour at work. For the UĦM Voice of the Workers, issues of Health and Safety at the workplace should be part of our lives. The Chief Executive of UĦM Voice of the Workers said that the union always ensures that Health and Safety is prioritised in collective agreements negotiations.

In the introduction to this workshop on Thursday, 5 December, Jesmond Bonello, Director of UĦM Voice of the Workers, said that from the workers’ perspective, health and safety at work is the only measure that reduces risks, protects workers and avoids incidents. On the other hand, through good measures relating to health and safety, workers can cut down on absenteeism, sick leave and incidents at work.

The Director of UĦM Voice of the Workers said that laws on their own cannot guarantee a work environment that is free of risks. There should be more enforcement and a change in culture on a national level as well as a European level.

Jesmond Bonello said that workers should be given all the necessary training on health and safety to be made aware of how they should tackle risks and they should also be offered other training including First Aid, fire fighting and evacuations.

He added that the UĦM Voice of the Workers, among others, trains its representatives and encourages workers to have an active role in representing health and safety.

Charles Micallef, Manager of the Occupational Health and Safety Authority (OHSA), spoke about OHSA’s role and the fact that the Authority seeks to safeguard workers from risk. He said that workplaces should have procedures for the reporting and investigation of incidents. Their aim is to increase incident prevention by identifying and treating the causes of incidents.

Clint Cachia, Principal Officer within OHSA, said that risk assessments should be carried out if there are any potential risks at a workplace. If carried out correctly, the risk assessment should encourage communication, social participation and worker involvement. He said, among other things, that if one perceives that a potential incident could occur, one is then accepting the fact that incidents will continue to occur. On the other hand, if one works on the principle that all incidents can be avoided, then one can work to stop them from happening and therefore embark on a programme of safety.

Silvio Farrugia, Senior Manager within OHSA, said that risk assessment is an integral part of the law. Research and statistics show that small and micro enterprises do not carry out risk assessments at their places of work because they think they are too expensive. He said that the EU should help these enterprises to adhere to the law. This can happen if they are provided with the right tools. Malta’s membership in the EU helped raise awareness about health and safety at work. With all its limitations, the OHSA is a point of reference but we still depend too much on Government in this sector.

Rotila Viorel, Manager within the Federatia Solidaritatea Sanitara, Eurofedeop, said that tradeunionism should address technological advances and informatics and how these impact the health and safety of workers. Veselina Starcheva from Podkrepa in Bulgaria spoke about sustainable work and related issues. She said, among other things, that social dialogue is an important tool for a decent work environment.

Magdalena Prangoska from  ZDR in the North of Macedonia spoke about health and safety in agriculture and said that the agricultural sector is a dangerous one. Therefore a number of initiatives, even legal ones, have been taken and are still being taken to minimise or avoid incidents in this sector.

The second session of the workshop was opened by Aldo Busuttil, a representative of the UĦM Voice of the Workers and a consultant on health and safety at the workplace. He said that if employers do not abide by civil and legal obligations they can be sued by an employee if they have an incident at the place of work. Employers also need to instruct workers and monitor them through inspections and meetings. This is so they are within the laws pertaining to Health and Safety. He added that representatives on health and safety should be heeded by employers.

Lenka Muzikova from the Czech Republic said that one of the main problems in her country is negligence among employers and workers when it comes to health and safety procedures. She said that the trade unions have a role to play in this sector because they need to defend the right of the workers to know what risks they face at their workplace. “If we want to increase health and safety, the workers and the general public need to be educated about the risks surrounding them.” She said that 43 per cent of the incidents in the Czech Republic occur in the manufacturing sector.

Mariana Lemos Martins, from Fidestra, Portugal, spoke about the psychological help that is given in her country to anyone involved in an incident or who suffers mental health problems at the workplace. She said that in Portugal there is still prejudice against mental health issues. She emphasised the need to train workers and increase their awareness to avoid unnecessary trouble.

Aneta Chelminiak, from the organisation Solidarnosc in Poland, said that trade unions have a social function to participate in the engagement of work inspectors. She spoke about inspections and auditing at workplaces. Solidarnosc cooperates with many entitities in Poland to ensure that processes regarding health and safety are adequate and are in place.

The workshop ended with an exercise on how one can communicate more effectively on the topic of health and safety. The exercise was facilitated by Daniele Fantechi, a UĦM  Voice of the Workers consultant.

This country cannot afford to wait until the 12 of January

Protecting the rule of law in the EU